A year ago, last June, is the last time I wrote a “soft” blog update. Since then, a tremendous amount has changed. 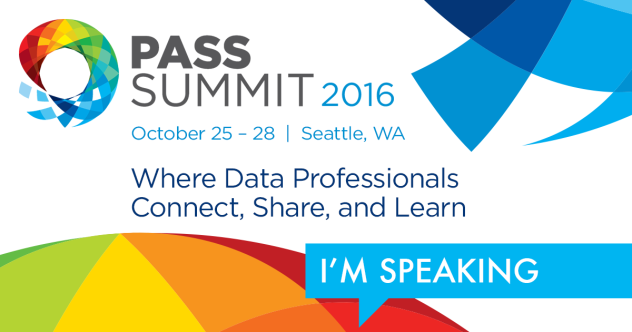 And how I’ve felt since getting the acceptance e-mail last night.

Since last June, I’ve changed employers. But more importantly I shifted my career path. I’d spent the better part of 10 years in Database Development roles, and felt it was time for a change. So I took an opportunity as an Operational DBA in a company with an extremely large environment. Now I’m working at a Managed Services firm, with a large team of other DBAs, on a variety of clients with some very large infrastructures.

The Chicago Suburban SQL Server User Group has continued to be a success. We’ve just hit our 2 year anniversary! We average 20-25 attendees a month, many of whom are regulars. And occasionally, depending on topic, we get more and/or even see new faces, which I always love!

I have also spent a lot of time speaking, over the past year. I’ve had the honor of being selected for a number of different regional SQL Saturdays. I was also flattered that SQL Saturday Portland accepted me. Portland was a big deal because that SQL Saturday preceeds PASS Summit, and often attracts many high-end speakers. I like to think of it as PASS Summit pre-partying! 🙂

At the beginning of 2015, I developed a new SQL Session: Uncovering Duplicate, Redundant, & Missing Indexes. Like my first session, it has been growing, changing, and maturing, with each subsequent presentation. I’ve been very happy with it, as it addresses a niche of Indexing that one does not commonly see offered in sessions.

I decided to continue my “1 new session a year” rhythm, and spent a good chunk of Q1 & Q2 developing my new session “Performance Pitfalls of Code Reuse.” I wanted to create a session to highlight my sp_helpExpandView (https://sqlbek.wordpress.com/tag/sp_helpexpandview/?order=ASC) community tool, while diving deeper into the technical “why’s” that drove me to write the tool. I presented it for the first time a few weeks ago at SQL Saturday Iowa and it was a huge success!

In 2015, I submitted to speak at the PASS Summit for the very first time.  I only had one session in my speaking portfolio.  I figured given the # of speakers & abstracts that get submitted, that I didn’t have much of a chance.  And I was not accepted, but I was okay with that.  I got some interesting feedback and I went on.

For 2016, at the time of Call for Speakers, I had 2 sessions in my portfolio and was developing my 3rd.  So I submitted all three.  I also took lessons learned from my prior year’s submission, refined my abstracts, and provided far greater details in my submission application.  And well, I’d like to think that paid off in spades!!!

I attended my very first PASS Summit in 2013.  At the time, I never thought I’d get into speaking.  But now 3 years later, I’m not only a speaker, but am absolutely flabbergasted, humbled, and blown away that I am been selected to speak!

I will have more thoughts to share later, but I’m still absolutely floored by this honor.  I want to thank everyone on the Selection Committee for all of their hard work!  Congratulations to my fellow speakers, and to those who were declined, I’ve been there too – chin up and carry on, you guys are awesome too!