Four years ago, I attended my first PASS Summit in Charlotte, NC. Never did I dream that I would get the guts to begin presenting. And if presenting was not even on my radar, someday receiving the honor of presenting at the PASS Summit was completely unfathomable to me.

Yet a week ago, that’s exactly what I did!

I was fortunate to be assigned to the very first session slot on Wednesday, the first full day of PASS Summit. I was effectively part of the lead-off team, immediately after the opening Keynote. The night before, I was not feeling all that nervous or anxious. My priorities were just to get a good night’s rest, and to make sure I was set up and good to go (I’m always paranoid about A/V issues). Leaving Denny Cherry’s party early bummed me out, as it was rocking, but this wasn’t about me – it was about the PASS Summit attendees!

I took a pass on the morning Keynote and got into my room early. It allowed me to get set up and into the mental zone. I was pumped and ready to have fun. I was not keeping track of time, but early birds started to straggle in, including a few people I knew. Chatting with them helped to pass the time until the Keynote wrapped up and attendees really started to stream in!

I was pleasantly surprised to see a number of friends show up as well. I honestly had no idea who would come see me. While I was in one of the smaller rooms, I still managed to pack them! I chatted up the crowd for a few minutes. I did ask who was a First Timer and was stunned when over half the room raised their hands! I thanked them for joining me and letting me help kick off their first PASS Summit experience! 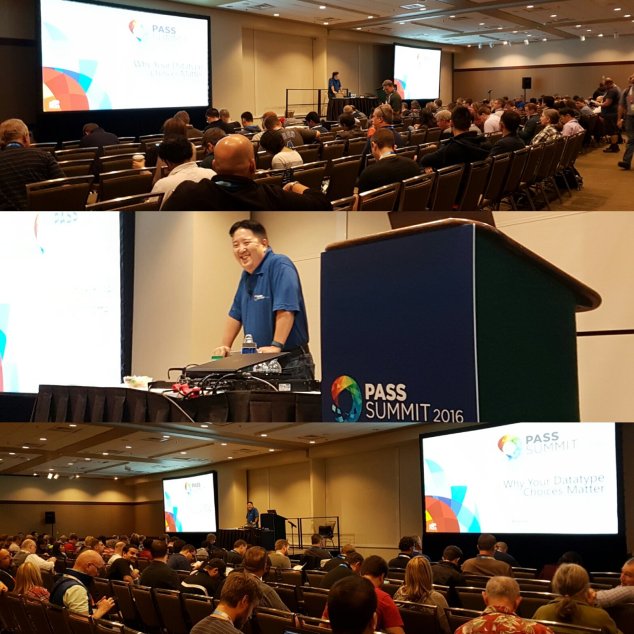 To be perfectly honest, I really don’t remember much about my presentation itself. I was jazzed, excited, and dropped immediately into my zone and rolled with it. I had spent a great deal of time preparing and rehearsing for the past month, to make sure my presentation was polished, and I believe that hard work paid off.

Afterwards, I had a bunch of people coming up to ask questions. As a speaker, that is very rewarding, as it shows that people were engaged and want to know more. Knowing I did not have another speaker after me (lunchtime), I took my time chatting with everyone who had lingered. It was a good way for me to start coming down from the high.

I received numerous complements over the subsequent days, from both friends and attendees. One random attendee went so far as to compare me against some very well-known, experienced speakers. That particular complement will really stick with me I think.

I really hope that this is not my last time presenting at PASS Summit. As others have taught me, one must never rest their laurels. I’m already thinking about next year’s submissions and what new sessions I want to develop.

Hope you all had a fantastic PASS Summit. I sure did!

One thought on “Post-PASS Summit 2016: Presenting Every Byte Counts”

This site uses Akismet to reduce spam. Learn how your comment data is processed.